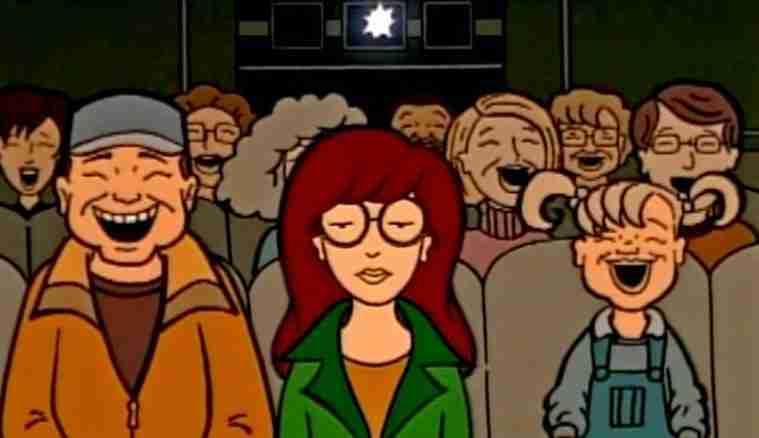 The Replay Value Of Daria Is Incredibly High

Much to my delight, the entirety of MTV’s animated show Daria has been available on Hulu and naturally I had to binge. For those too young to know, there was a time when MTV was relevant. They used to produce highly original and thought provoking content. They even had Kurt Loder report some fucking news. This was a golden age that died a slow, miserable death as ratings pointed toward reality TV. One of the gems that spawned from this time was an animated show based on a reocurring character on Beavis and Butthead called Daria. She was sarcastic, easily annoyed and unimpressed with the typical trappings of youth. This show had my number and I was hooked. The second I heard that opening theme “You’re Standing on My Neck” by Splendora, nothing else was going to get my attention. Watching it again has been a cathartic delight.

When I first watched Daria I was young, pissed off, and nicotine addicted. Most of the show fell right into my wheel house, however watching it again, I realize there were some things that got past me. The big thing I missed was Daria’s parents, Helen and Jake, these two are quintessential baby boomers. 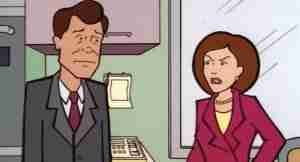 They mean well, but are easily blinded. Watching these two helps add up A LOT of the current societal issues we face today. The show does an excellent job of showing how these two went from peace loving hippies to detestable suburbanites who forgot to ask for more from their politicians.

Jodie Landon was a character ahead of her time, I actually didn’t realize that because at my high school I knew so many young black women who reminded me of her. I didn’t stop to think how rare it was to see someone like that on TV or how much her presence meant to those who looked and felt like her. 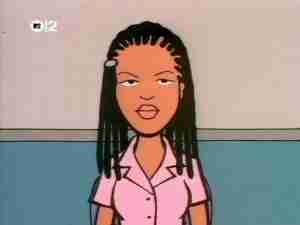 She was kind, an academic dynamo and nice to everyone no matter where they sat on the cool spectrum. Throughout the show she was confronted with issues of race and part of that dealt with her being the only black girl in the school. There’s a fan favorite episode where Jodie and her boyfriend Mack, the only black young man at the school, are elected homecoming queen and king out of essentially white guilt and are sitting on a parade float. Annoyed at the situation, Jodie calls out their token status but her anger wains as a young black girl looks up at the two with a big smile. Too bad characters of Jodie’s caliber have not yet become the norm or given more spotlight.

You can’t pick your family, much to the dismay of Daria, but you can pick your friends, and the epic of Daria and Jane is a damn good one. When Daria first moved to Lawndale, she anticipated not being able to make friends the way her popular menace of sister Quinn does with such ease. Lucky for Daria, Jane Lane, local artist and fellow combat boot enthusiast came to the rescue. The two fell into an easy rhythm of pizza consumption and judging their classmates. 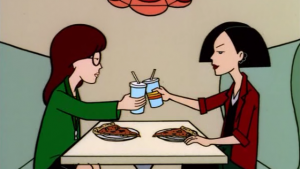 Naturally Quinn made quick friends with the popular girls who take turns clawing at one another with underhanded compliments and ploys. Quinn’s friendships are the epitome of how media loves to present women. Meanwhile Jane and Daria’s friendship is one that demonstrates women can be more than stereotypes. They showed that not all “alt girls” are the same and that women really do know how to be friends to one another. Jane came complete with a crush worthy older brother Trent who of course, was in a band. Jane would poke fun at Daria for her crush on Trent but would often still try to help her no matter how hopeless it was. Of course the big whammy (spoiler alert) came when Jane got a new boyfriend who eventually falls for Daria. The show handled that whole thing so beautifully, they let the girls be vulnerable and emotional but not petty or catty. It was tough, and in the end, they maintained a steadfast bond.

Watching Daria again at 32 has put my restless heart as ease a little bit. When I’m feeling incurably irritated and can’t seem to stop speaking in sarcasm, which has sort of become my default, I know there’s a place in the world for people like me.

Now I hear there’s a Daria comeback in the works and I’ll be honest, I’m skeptical to say the least. This has been tried with Beavis and Butthead and the same magic just wasn’t there anymore. Read this next sentence in your best Sandi Griffin impression: 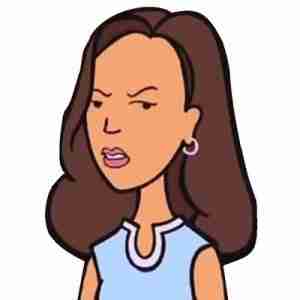 As president of the fashion club, I STRONGLY recommend watching the original again before investing yourself in any new rendition of the show.