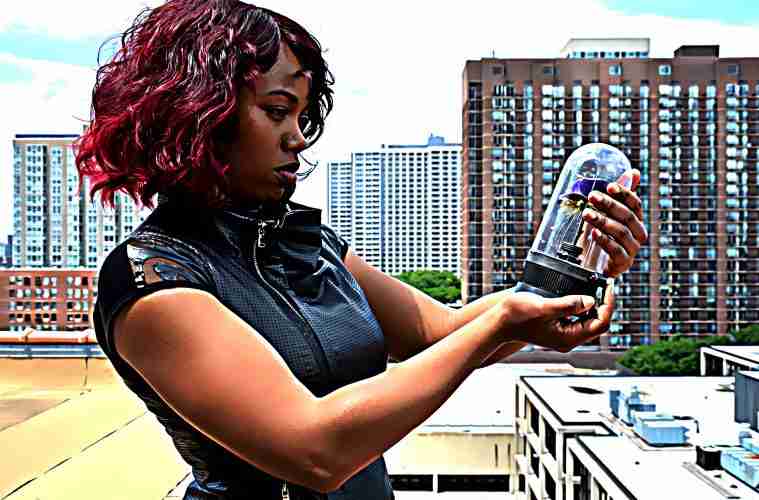 The Sugar Gamers’ Project Violacea was originally conceived by a group of primarily women of color. The ever-evolving concept is has involved a number of important ideas relating to Black History since the beginning. So, as part of this Black History Month, we wanted to take a dive into some of the deeper influences that underlie Project Violacea.

In 1951, a black woman who grew up on a tobacco farm in a house that was formerly plantation slave quarters fundamentally changed biomedical research. Her name was Henrietta Lacks and she helped usher in the modern era of vaccines, cancer treatment, human genetic research, and Big Pharma.

Henrietta’s story is complicated and important, if you have not heard it. In short, she died of cervical cancer in 1951. While she was still alive, doctors took samples of her cancer for treatment and research. While studying her cancer cells, the doctors discovered the cells could grow in petri dishes and reproduced by dividing and cloning themselves incredibly quickly. This was the first stable, immortal human cell line ever discovered. The researchers named the cells HeLa, from Henrietta’s name. HeLa cells first helped doctors develop the vaccine for Polio and have been involved in innumerable medical discoveries since then. Today, almost every lab doing research on human biology and medicine uses HeLa cells because they are so easy to grow, are so standardized, and avoid the ethical concerns associated with experimenting on entire, living humans (nih.gov).

Well… HeLa cells don’t entirely avoid ethical issues. In fact, the cells are actually a tangled knot of complications that intersects many of the issues facing modern black people. To start, the doctors never told Henrietta or her family that they used her cells for research and her family did not find out about the use of her cells until the 1970s. She did not consent to the public distribution of her tissue all over the globe. In 2013, the genetic sequence for HeLa cells (Henrietta Lacks’ DNA) was published for public use without her family’s permission. Furthermore, HeLa cells are largely used in for-profit companies and have led to trillions of dollars in profits for the pharmaceutical industry – not a dime of which has ever gone back to the Lacks. At least now her story is being told in amazing books like The Immortal Life of Henrietta Lacks and has inspired an incredible legacy.

The story of Mrs. Lacks and her superhuman cells embodies issues with consent, transparency, body autonomy, transhumanism, economic inequality, race, gender, and class. Her story is definitely one of the reasons we wanted to take a strong biological focus in Project Violacea. In the world of Project Violacea, the totalitarian regime that rules the world keeps everyone’s genetic sequence on file and can use your DNA to track you, prosecute you, or make other decisions about how you can live your life.

In the dystopian world of Project Violacea, the environment is collapsing and the planet is rife with drought, famine, and disease. To preserve humanity, the MOX began rationing resources and controlling population growth. While this might at first make sense in a survival, sci-fi setting, the nightmares of forced human population control are all too real in the history of black Americans.

In this case, I am referring to sterilization programs in the US, which often took place without the consent or even knowledge of the patient. These programs took place in the early 20th century with the advent of eugenics. Led by state-level and local laws, doctors sterilized people considered “undesirable” and focused on criminals, the mentally ill, disabled people, people of color, immigrants, poor people, and unmarried mothers.

Sterilizations took place in prisons or hospitals while patients were admitted for other treatment. This terrifying problem seems like a thing of the past, but “California prisons are said to have authorized sterilizations of nearly 150 female inmates between 2006 and 2010”.

The prospect of being surgically sterilized without your consent is horrifying, let alone with the fact that these programs were implemented by our government and targeted vulnerable people – especially women and people of color. The invasion of body autonomy, the importance of reproductive rights, and the significance of institutional inequality all made the topic of forced sterilizations or other surgeries something we wanted to engage with in Project Violacea.

Whoa boy! I hinted at it last section, but one of the ugliest elephants in the room, when talking about race and 20th century American history, is eugenics. On a broad scale, white Americans have used cherry-picked ideas and skewed logic from biology, genetics, and evolution to justify racist policies and laws. Since the rise and fall of the movement, we have come to understand how flawed and cruel eugenics is. I don’t throw it around often, but I have a PhD in Ecology and Evolution and I can go on and on about this topic.

For now, I will give you the briefest explanation I can: eugenics artificially selects for specific traits deemed “desirable” – intelligence, strength, beauty, etc. However, these types of traits are incredibly complex and have massive amounts of genes underlying them. By trying to forcibly select for these trains, all eugenics does is reduce diversity in the gene pool and homogenize the population. Reducing the gene pool actually decreases the population’s ability to respond to future changes in the environment, like new diseases, changing climate, or shifts in food availability. Eugenics is humanity shooting itself in the foot while targeting our weakest and most vulnerable citizens.

In Project Violacea, we want to use the lens of a sci-fi game to help teach people the history of these programs – our history. Often in the hypothetical, people can accidentally (or intentionally) argue themselves into statements that align way too much with the logic of eugenics. It might take a few drinks or the right company for it to come out, but I personally have had to explain to people on multiple occasions why eugenics is a horrible idea and why it wouldn’t work “even in fiction.” With the topic being so applicable to the people in Sugar Gamers and with White Supremacy back on the rise, we decided to take an unflinching stance on eugenics and not dodge this unsettling and horrendous reality.B

The above mentioned topics are admittedly bleak. Unfortunately, taking an honest look at parts of Black History can leave us feeling emotionally torn. However, the nightmares of past show us to a brighter future. The fact that a black woman’s DNA and body tissue is the basis for most of our vaccines, pharmaceuticals, and medical research is mind boggling. The appalling things doctors and lawmakers have done to Black Americans in the past and present show us how institutional inequality can invade people’s lives and bodies and how we need to protect vulnerable people. The failures of eugenics demonstrate the benefits of diversity on a biological level. These are lessons that are important to us at Sugar Gamers, which is why we are including them in Project Violacea.

In addition to teaching people about their pasts, we are using the game to highlight amazing things black innovators are doing right now. We will include stories, art, music, and other media from creators in marginalized groups to enrich the Project Violacea experience. That is one of the reasons why we started with the tabletop RPG version of the game – it is a flexible foundation that will introduce people to the fictional world and give them guidelines, resources, and suggestions to build their own creations in the setting. Once we publish the core rule set, people will be able to play the game and then come up with their own ideas that we can then release as art collections, short stories, or playable adventures. The possibilities are endless and we can’t want to share the game with you and see what you do with it!