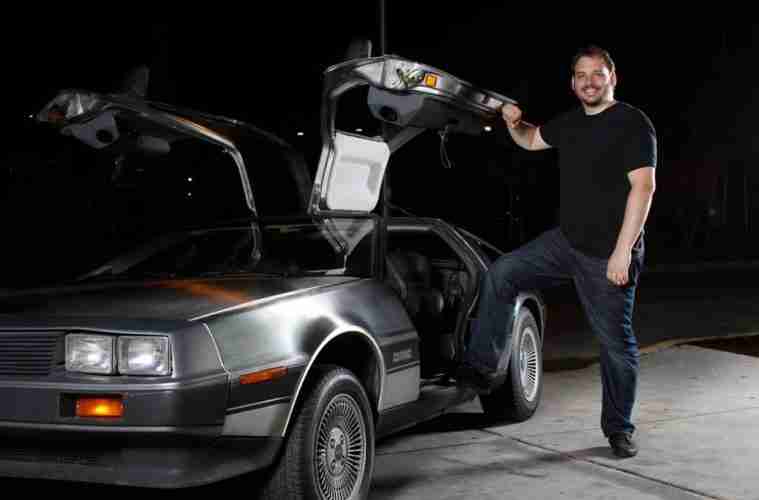 Ross Hersemann has been a long time friend to Sugar Gamers. He’s a fellow Chicagoan and nerd of all trades. The two of us share a special bond over our love of Halo and as you can see, Deloreans. Ross is a lawyer I have enlisted to tackle a subject I have ranted about many times, the old chestnut of fan art for sale.

I think the medium of fan art is cool, it’s a great way to get noticed. However selling it undercuts everyone who paid for the license and permission as well as the pros we all consider heroes. This is my standard argument, this time around I thought I would hit it from a legal standpoint. Take it away Ross.

Okay lawman, who are you? What makes you qualified to speak on this topic?

Thanks for asking! First and foremost, I’m an attorney. My law practice Loading Law caters to the needs of video game developers, tech industry entrepreneurs, and all creative types in entertainment. I run an annual law symposium called the Chicago Video Game Law Summit (CVGLS) that discusses hot topics in video game law, and I am the Chair of the Chicago chapter of the International Game Developers Association. I also teach a course in video game law at DePaul University. If you’ve got questions about legal issues in games or the Chicago video game scene, I’m who you should be talking to

Fans love to make things that involve their favorite intellectual properties whether it be films, fan fiction, fan art and even games. What’s a quick rule of thumb so these fans know they’re operating within the law?

They really do, don’t they? Fan works are all the rage and have been for years. Unfortunately, they’re a very problematic practice, legally speaking. The fan art you see for sale at many conventions is almost certainly infringing on someone’s registered trademark or copyright in some way. It’s an industry wide problem.

For rights holders: how do you encourage an active and enthusiastic fan base while effectively policing your rights so you don’t lose them at the same time? For fans: how can you create an homage, a tribute, to a property you love without having to pay through the nose?

There unfortunately aren’t simple answers to these questions because so much depends on specific circumstances and the folks involved. Generally speaking, there are certainly times when you can use another’s work without permission, but permission is always the way to go if you want to be super careful. Inventing your own intellectual property or seeking a license to use an existing property might seem like a drag, but it’s a lot less hassle than a lawsuit and it should be your first strategy before you consider doing anything dodgy.

There are a lot of voices out there declaring what is legal in regards to fan art being sold. Some say as long as it’s a commission it’s fine. Some say the trick is to not mass produce those works. Would you care to bust some myths?

Few of those voices are lawyers, so take what you hear with a grain of salt. Right off the bat, remember that copyright/trademark infringement is a yes or no kind of legal issue. A rights holder will care first if you infringed their rights, and second how you did so or how much money you made in the process. You can negatively impact a brand without making a dime, so how much money you made is a secondary consideration to the rights holder.

As far as skating under a rights holder’s radar goes, think of it this way: murder is still wrong even if you don’t get caught. A rights holder never finding out you infringed their rights because you kept things small doesn’t make it a legal or morally justifiable practice. It also doesn’t mean the costs for you will be small. Statutory damages for a SINGLE infringement will cost you thousands of dollars.

While we’re discussing fan art, are these show organizers liable for lawbreakers profiting at their shows?

They certainly could be! Most convention organizers have existing policies in place not to tolerate infringing merchandise and artwork. However, I can’t speak to how often these polices are enforced where and when they exist.

In regards to fan films and fan art as well, a lot of these people use “parody” as a means of getting around the law. What say you?

Sigh. They’re not as clever as they think they are. Satire and Parody are DEFENSES to an infringement action. Specifically, they’re what we call affirmative defenses. To raise them, you have to admit infringement first. It’s not a good place to start in litigation out of the gate. Raising those defenses means you’re already in court, you’ve already called yourself guilty, and have spent thousands to get there to do it just to claim an exception to the rule. There’s a very good chance Satire and Parody don’t apply to your situation anyway. Don’t rely on them, they’re not silver bullets.

Let’s talk about fan made games. Microsoft recently shut down Halo Online, where did those guys go wrong? Is there a way to do it right?

Written permission and licenses are the way to do things right. Making something new and creative that doesn’t infringe the rights of established properties is even better. Sometimes, the best way to honor a brand you love it to let it go and made something NEW inspired by it, not derivative of it.

I’d like you to remove your lawyer hat for a moment and speak as a fan and legitimate nerd that I know you are. How do you feel about this boom of fan made content? What are the pros and cons for you personally?

I love seeing how creative and talented members of the fanbases can be. As a consumer I love seeing fresh perspectives and takes on things I love that may have grown stale over the years. Unfortunately, the creation of that great content doesn’t justify theft when there are avenues to make it legitimately. I wish creators would take 10% of the effort it takes into making an amazing thing and devote it to doing so legally and with permission. They’d be surprised how easy it can be sometimes. Did they ever TRY asking?

I would to extend my gratitude to Ross for lending his expert opinion on this issue. You can check out his official website or find him on twitter at @LoadingLaw.