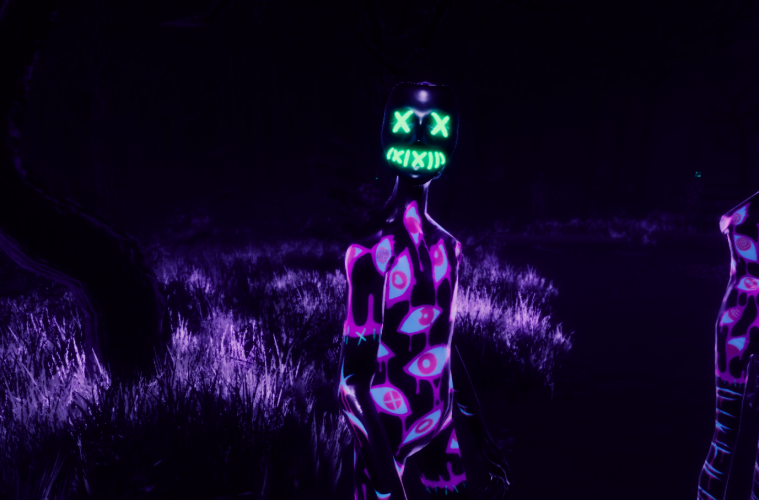 Do you remember the days when your friends contacted you late at night to go to that one rave in the forest? Most of the time you had to first meet at a map point to collect the directions to the party in the most discreet way possible. Now imagine you’re there getting out of your car, it’s late at night, then you run into other people who make you feel like you might have underdressed for the occasion. Especially when you start noticing the comforting signs that read, “We (sh)all DIE”.

Now, I know what you’re thinking, a possible survival horror situation is about to happen.

I mean, you can’t even hear the music yet, just pure silence as you’re trying to put the situation together in your head. Get this, after you make it down the struggling dirt hill, start gazing at your soon-to-be new dancing friends, you realize the realness of actually having to stand in line for a ticket; I know. Behind people; Even worse.

As you’re standing in line watching everyone use their phones trying to figure out your next move you randomly start asking yourself, are you into playing survival games? Because if so, what about a horror survival game where you’re placed inside a unique psychedelic dark forest in a rave atmosphere within the unknown surroundings? Even with the possibility of a danceable dark-electro soundtrack blasting at The Headless Festival, and your only way to pay for a ticket in is by taking the lives of attendees’?

Yes. You read that correctly—the lives of attendees.

If you said yes to any of the above, then hang tight. Because instead of living that moment of you being at the party in real life, the indie game startup Green Tile Digital, based in Skövde, Sweden, has you covered. Strobphagia: Rave Horror – Dance, Drink & Die was released on PC through Steam at the end of last month on October 28th, right before the magical holiday of Halloween.

As you, the player, wander around figuring out how to escape, the forest will try to trick you in ways of making that rather difficult. Whatever you do, stay away from the shadows in the darkness. You’ll also run into ghastly puzzles following twisted logic with objectives from your cellphone.

Or sometimes even beer.

Inside the game you use a unique smartphone-mechanic, which allows players to follow the wi-fi signals of various pirate boxes, scattered around the forest rave, in order to find their way around the festival grounds. This also allows the player to communicate with the other attendees connected to the individual networks. When learning how to survive it’s very wise to use your cellphone, otherwise, you’ll aimlessly get lost inside the neon labyrinth of darkness.

Luckily, Sugar Gamers was able to get ahold of this game early for a stream on Twitch. If you would like to go back and see how Keisha Howard navigates her way around The Headless Festival while screaming her head off as she runs into attendees with epic dance moves, I highly advise it.

In the meantime, before you turn your speakers off for the night, check out the launch trailer of Strobophagia: Rave Horror below.

Luckily, Sugar Gamers was able to get ahold of this very unique survival horror game early for a stream on Twitch.

And for the ones who want to see Keisha Howard navigate her way around The Headless Festival while screaming her head off and running attendees with epic dance moves, we highly advise it.

Now as yourself, even a multiplayer option for this game exists, are you able to make your way out without losing yourself? Let us know.