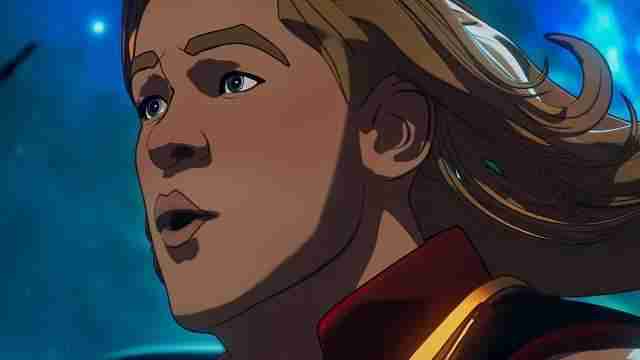 Sometimes You Just Wanna See Silliness and Superhero Fights, and That’s Okay: Marvel’s What If…? Ep. 7

What If episode 7 is a much needed breath of fresh air. The series has dabbled in the fun now and then, but at large, it has been a whole lotta the sad broodies. And not so much of the chuckles, ya dig?

This Thor centered episode has:

Just giggles with our favorite asgardians.

The latest episode centers upon the vague threat that Astrophysicist Jane Foster has captured an energy signature on planet Earth. The same signal has been detected here on a different planet moments before its demise. When she traces the signal it turns out to belong to none other than Thor. That’s it. That loosely explained destructive potential is the closest we get to understanding why we should even be concerned.

From the stylistic art choices (Peep the map with the names of countries emblazoned upon them as characters fly across the sky), the zippy musical score (sort of like an intergalactic polka vibe), and the Guest appearances from the Guardians of the Galaxy, Nebula, Yawndu, The Grandmaster & Korg, just to name a few— all things combine to make this episode a joyous romp with characters we’ve sorely missed. The nebulous threat looming on the horizon isn’t a main story driver because the sophomoric humor and flashy fights are more than enough to provide entertainment.

And who could forget the central, albeit understated, premise of the episode, the relationship between Thor and his “brother from another mother” Loki, who are not siblings in this universe?

So charming. So fun. We’ve virtually never seen the two characters except at odds with one another, and here they are, just being friends and truly enjoying each other’s company. It’s just so damn adorable.

Captain Marvel’s addition is not quite as effortless and charming as her titular film but certainly fits the bill for this tongue-in-cheek joy fest, adding some pretty spectacular fights to boot.

Of course, the show’s creators felt the need to throw in an ominous cliffhanger at the end of the episode, but luckily, it is as ignorable as it is unnecessary. It’s okay to base an episode around meet-cutes, epic battles, and, frankly, the amazing chemistry between Chris Hemsworth and Tom Hiddleston. It’s not Shakespeare, but it’s FUN.

And that is okay by us.