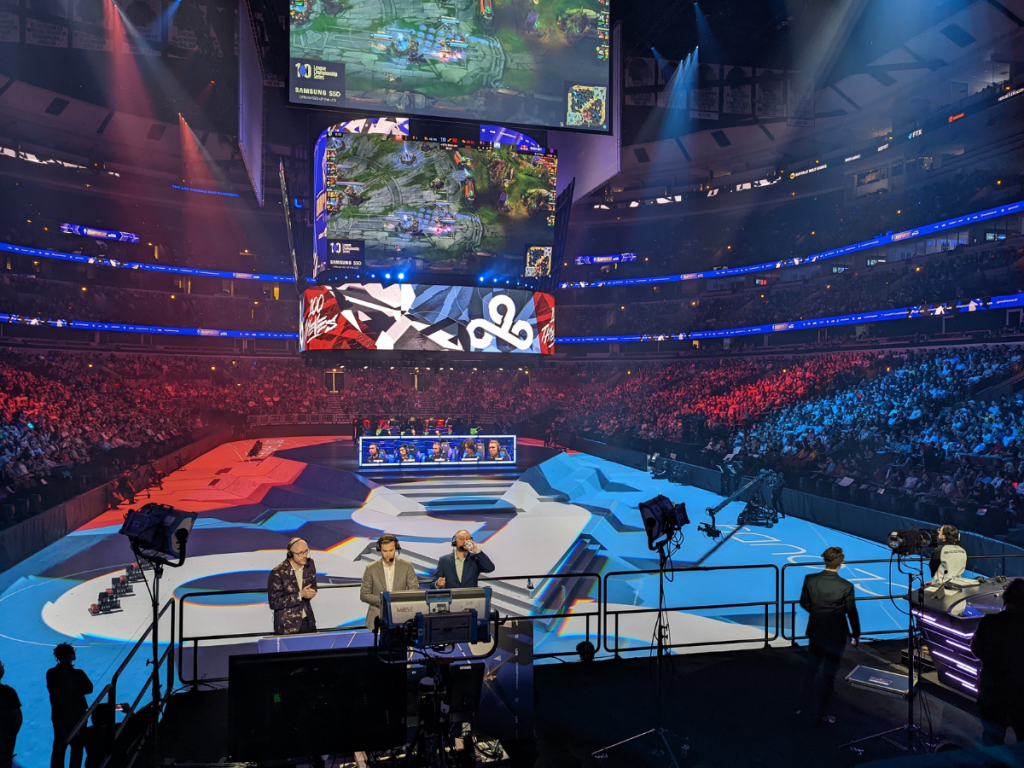 The United Center in Chicago, IL is no stranger to big crowds and eruptions of cheers when it comes to physical sports, esports is no different. Chicago has hosted Counter-Strike: Global Offense, the League of Legends Quarterfinals in 2016, and now the League of Legends Championship Series 2022 where Sugar Gamer, Junae Bennett, made it onto the scene for our latest coverage.

The weekend of the LCS 2022 was not a pretty one, weather-wise. It was a humid Summer Saturday reaching almost 90 degrees. Then winds and rain came in Sunday, sweeping away the warm weather and leaving us with a rainy 60 degrees. That didn’t stop fans from sloshing their way to the United Center in support of their favorite teams. Although both teams, 100 Thieves and Cloud9, have won North America Championships, we heard the crowd favor Cloud9.  Who could blame them when they have a top player like Nicolaj “Jensen”?

Cloud9 made light work of 100 Thieves in the first round, 13 – 3. 100 Thieves took it on the chin and came in swinging, trying to give themselves a fighting chance – to no avail. With an incredible 3-0 win we haven’t seen in this 2022 series, Cloud9 adorned the title of North American League of Legends Champions. This is a huge win for the team, and players like Minchul “Bersker” Kim broke a record by doing 38% damage – unheard of! The most damage we’ve seen done in an LoL match is 32%.

With all of the amazing things happening, the real winner is Chicago. We love to see esports events of this caliber pop up in our city. We have the location for it, with fantastic food, and not deep dish pizza for those who love the great pizza debate. Have you ever heard of a pizza puff? Do you know where you can get a gyro, elote, and pierogis on the same block? Right here in Chicago. Our city is home to a variety of arenas; the United Center, Now Arena, Chicago Theatre, and Soldier Field, which hosted Beyonce and BTS. We have both the food and the venues for all your tourney needs.

Chicago could be an international hub for esports events. But don’t just take my word for it. Local gamers see the potential in our city to host more large-scale esports events. Local fan Jayce was pumped to see crowds of over 20,000 flooding into the stands of the United Center for the LoL Championship held this past weekend. When asked if he’d like more esports to come to Chicago he enthusiastically agreed more should happen here.

“Chicago is an amazing city. It’s a huge city, it’s relatively underrated when it comes to events,” said Jayce.

Ally, who is an avid LoL player, is attending her first ever esports event and is a first-time patron of the United Center followed up with,

“I think it’s a really interesting [event]. I saw a lot of women and when we run into women on the game, it’s really exciting for me. It’s good to see so many women in person…” she continued, “We have such a diverse group of people all at one stadium just to support people playing video games.”

Speaking to the United Center’s staff revealed that they want to see more esports events. They were enjoying the experience of something different. And a couple of them were happy to see their hobbies on the big screen.

”… I use it to explore and it was really fun visiting [Chicago]. I was here before but that was over a decade ago,” said Mukkepati

Even LoL streamer and content creator for Misfits an esports clothing brand, Reagan Mrs. Chim Chim said this is her first time in Chicago and was excited to have the experience.

“I thought it was pretty cool. I love that League is going to new cities. They’re even going to Atlanta this year, which is my hometown. I’m super stoked. It gives people who can’t normally travel a chance to see their favorite players or their favorite game live and in person,” said Mrs. Chim Chim.

Locals and newbies to the city alike are enjoying the experience of Chicago. We need more people to have the Chicago experience.

Helping to bring more esports events is the local business owner of I Play Games, Kevin Fair. Fair recently became Youth Outreach Partners with League of Legends. This means local high schools and colleges had an exclusive experience at the LCS 2022.

We love seeing businesses help make Chicago look like a viable and attractive city for esports events. Fair helped Riot Games staff and LoL fans experience just a taste of what Chicago has to offer the esports world.

“Getting an opportunity to work with the biggest esports company in the entire world is really impactful for A, a small business, and B, students aspiring to get into the space,” said Fair owner of IPG.

If you aren’t familiar with Fair’s work, here is what LolEsports.com has to say about him,

‘In 2009, Tournament Organizer and Esports Expert Kevin Fair created I Play Games! (IPG) as a way to bring his favorite hobby to the wider Chicago community. In the years since, IPG has grown into a nationwide leader in providing Esports & Video Gaming-related entertainment with services such as equipment rentals, tournament operation, and event staffing. Gaming is a lifetime passion for IPG CEO & Founder Kevin Fair who has translated that passion into Youth Workshops and After School Programs for over a dozen Chicago area schools and groups like The Chicago Park District and The Chicago Urban League.’

He’s been in the community for a long time and will continue to help grow Chicago’s esports scene. We are confident other esports companies will see the magnificent time the LCS has here in Chicago and jump on the L train to do events here.