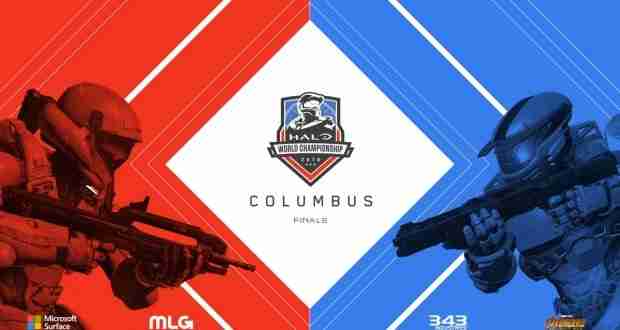 Columbus, Ohio was home to the North American Regional Finals for the Halo Championship series and it was everything esports fans could hope for. Day one was spent at the Easton Town Center Microsoft Store because there was no room for spectators in the MLG Columbus studio. Some of 343’s finest were in attendance.

I was accompanied by some of my favorite cohorts from the Drunken Halo Podcast community. (From left to right, @Wakazhi_AOT , @Barker3797 , Me, @MendingMercy , @Gunfigter100) There was a 2v2 tournament taking place, Bark and Gunfigter on one team, Wakazhi and myself on another. Wak and I did manage to make it past our first round, but after that it was all down hill.

On day two the MLG studio was opened up and the casters and spectators poured into a very intimate atmosphere. It’s no wonder tickets sold out for this event so quickly, this was a very petite venue for something as serious as the regional finals.

There was a water supply issue where MLG was only giving out water to players and staff. They did give us a food truck, however said food truck did not sell beverages. Despite overhead shots of downtown Columbus, we were not downtown, we were in a desolate commercial building site with nothing near by, luckily we had people with cars to make water runs. MLG also put out a cake, but only for players and staff. I was lucky enough to be given a piece of cake, however I did feel guilty and sad that not everyone could have cake considering how small the crowd was. The MLG Columbus studio is by far the smallest venue I have ever been in to attend an official Halo tournament. It was fun rubbing elbows with everyone, however part of me missed the big crowd and the hype that would have come with it.

Before I get into Splyce taking the rule book for professional Halo success and tearing it to shreds, I wanna dig into some honorable performance mentions.

The wildcard brackets were well worth the watch this year. Standing out was Wise Gaming who showed consistent performances against Mentality and Armada. Everyone on the team is a damn decent shot and Gilkey and Commonly in particular seemed to really understand one another and play to each other’s strengths. Gilkey goes for power and manages to score game changing clutch plays. Meanwhile Commonly is a well rounded player capable of transitioning from leading the charge to strong support in the blink of an eye. I truly enjoyed watching Wise make their mark.

There was no ignoring Reciprocity this weekend and it took a good amount of hustle for this team to place where they did. They managed to make quick work of Renegades walking away with three wins. In their bout with Splyce they wrangled two well-earned victories for themselves. In fact, high on my re-watch list is the series between Splyce and Reciprocity. Even against Tox, Reciprocity executed methodical pushes and gave them a run for their money taking at least one victory with them. These guys clearly focused on taking advantage of power ups and weapons and it paid off.

Pznguin was able to put on quite a show with power weapons, his rail gun shots were absolutely mind blowing for me personally. Meanwhile Royal2 utilized his signature map movement to help keep his team in control. These guys should be proud of what they accomplished, I know Pznguin’s dad is. By the way, if you have the opportunity to sit next to the legendary DADDYPZENGUIN during a Halo tournament, DO IT!

A hot button issue for Splyce was their lack of online practice and scrimming. Instead the team opted for 2v2 and team building. This cast a lot of doubt on the team as tradition dictates practice makes perfect. However, one could tell Splyce had definitely not been wasting their time. When playing Envyus, we were given a chance to listen to both Envyus and Splyce and you could immediately hear the calm, minimalist approach Splyce had for their communications compared to that of Envyus.

Right off the bat Splyce was in the hole, they had to forfeit their match against Renegades which put them in the losers bracket. This meant the team would spend most of this tournament constructing a ladder to climb out. However Splyce said screw the ladder and strapped on a jet pack to blast their way back to the surface to meet Tox for the final showdown.

In the first series of the novel that could be written about Tox versus Splyce, Tox came out on top. It was a close series, but overall Tox was in control and took the win 3 to 1. Frosty and Lethul were looking confident and cocky as they made big slays and power plays. Gee, they almost reminded me of this team that used to wear green all the time, I think they were building a wall or something.

Due to a necessary bracket reset the final battle required back to back series of Tox versus Splyce and the first series shocked the hell out of me. Splyce MELTED Tox, the score was 4-0. Don’t get me wrong the series made for great watching but holy shit was it fast and Splyce had all the wins in their hands. I had seen this before, from a certain green clad team, where you think they’re down but they come back to take the win like it was planned. Not this time, the next series, while again close and full of nail biting action, was all Splyce. In game four of the final series Slpyce had DOUBLE the slays of Tox, now they were just making this look easy and everyone was in disbelief. By game five, you could tell Tox was wide awake and looking for their comeback. Game five was a slayer match and so infuriatingly close, it drove everyone insane, even the casters.

In the end, by way of a bone chilling sniper head shot, we had our winners, Splyce.

This is not the last chapter in the saga of Tox and Splyce as the World Championship in Seattle is quickly approaching. Congratulations to Splyce for this incredible win and props to Tox for making it a hell of a tournament. I am beyond anxious to see how it all plays out in Seattle.