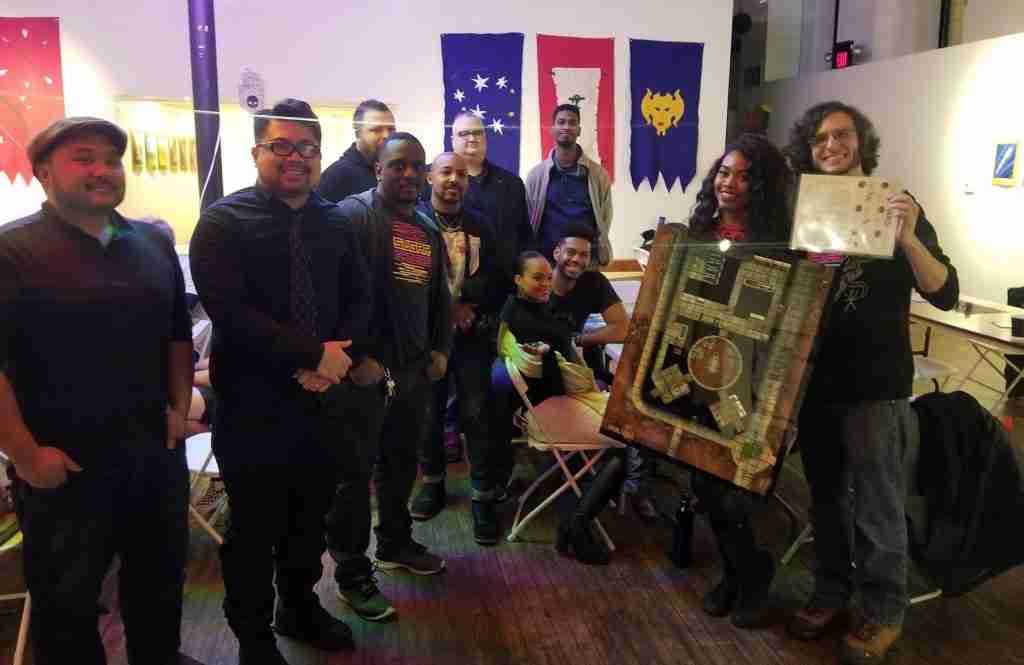 In January, the Sugar Gamers attended a special event that is one part fund raiser, one part art show, and one part massive tabletop Roleplaying game (RPG) event. Led by famed Chicago-based game designer, Will Hindmarch, the event features over a dozen simultaneous games of Dungeons and Dragons that are all part of the same, enormous, interconnected quest. Involving over 60 people, players can pass cryptic messages and items between tables, using special portals their characters find in the game.

Called Level Eater, the annual event lends an old-school D&D (Dungeons & Dragons)  vibe to the evening. Most attendees were dressed for a metal concert and the walls are covered in huge art pieces featuring demons, goblins, witches, and mercenaries. The event raises money for local Bridgeport radio station, Lumpen Radio and was held at the Co-prosperity Sphere.

The evening was attended by local RPG VIPs like designer/ writer/ podcaster Ken Hite, Darcy Ross of Monte Cook Games, and Tasha Robinson from the Verge, as well as award-winning DC artist Gene Ha and a slew of local indie RPG game designers for us to mingle with and learn from.

The Sugar Gamers joined in on the fun this year to scope out the latest in cutting edge RPG events and test the latest iteration of the soon to be released Project Violacea game.

Sugar Gamer’s member, Colin Kyle, has taken the helm as Dungeon Master for the event over the last three years and knew it would be the perfect opportunity to playtest the beta version of the coming Project Violacea board game and meet local RPG enthusiasts. Yes, you read that right, we here at Sugar Gamers have been working on a new tabletop RPG version of Project Violacea, which will be available for you to take home soon!

Playtesting at Level Eater was great for the new iteration of Project Violacea because we are designing the game to be easy for new players to jump into without any experience. The sci-fi, biopunk world of Project Violacea is wonderfully complex and nuanced, which is a challenge and an opportunity for this style of “pick-up-and-play” game. To accelerate the gameplay process, we took cues from boardgames like Zombicide and Pandemic and broken down the game almost entirely to cards, tokens, dice, and a board.

This style of RPG-boardgame hybrid has the immersion and creativity of a traditional RPG, while providing play-aids to give support and structure to the players. We are extremely excited about how well the playtests went at Level Eater and cannot wait to do more public playtests in the near future.

We had an amazing turnout at the event, with a small crowd of Sugar Gamers and supporters coming to help playtest and represent. Sugar Gamers Founder, Keisha Howard, and Colin Kyle ran three playtests with many of the core members of the Sugar Gamers and friends of the organization including DJs Miles Holt/Mauser and music producer Audio-X (Xavier Smith-Clark). We were particularly grateful to Miles could join us, who is a longstanding member of the Chicago music scene and currently works with Teklife Crew, Jupiter4, Plan B Records, and Synapsis.

“As I am new to RPG games, this project is fun and exciting in a way that I didn’t expect. I can foresee it expanding rapidly, due to its user-friendly nature and open-ended platform for situational creativity. It’s hands on, mind in, approach to problem solving makes it such a fun game to play with friends. I am excited to be a part of this.  In other words…. jump in! It’s worth it in every sense.”