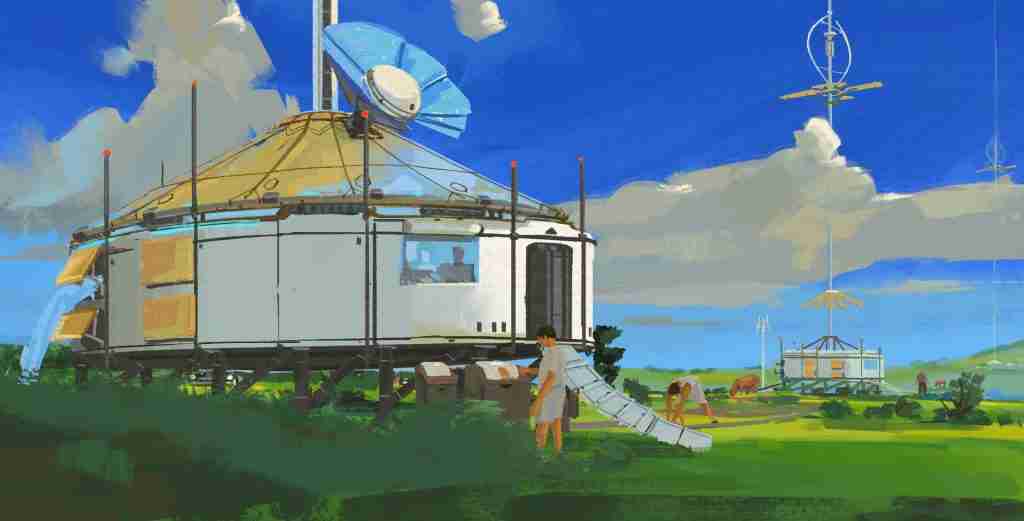 Have you heard of Solarpunk yet? You might have seen the word “Solarpunk” on a blog, pinterest, TED talk, or your local bookstore. You might have heard people talking about the importance of a sustainable future with California recently almost reaching 100% renewable energy (2/3 of which is solar) and the Antarctic’s ice sheets surprise collapses last month. Even if this is your first introduction to Solarpunk, you will most certainly hear more about it in the near future.

A budding new sci-fi genre building momentum, Solarpunk means many things to different people. In general, people think of Solarpunk as a future where humans live in tune with the environment while incorporating sustainable technological innovations that benefit humanity and the plant. This loose definition incorporates everything from Black Panther’s Wakanda to Studio Ghibli’s Nausicaä of the Valley of the Wind. Because of the range of views on this developing genre, we started asking members of Sugar Gamers – WTF is Solarpunk?

To Sugar Gamer member and PhD ecologist, Colin Kyle, the core of Solarpunk is radical environmentalism and explores the conflict between environmental sustainability and human greed.

A great example of Solarpunk to Colin is Margret Atwood’s “Oryx and Crake”, which delves into people building a green-washed utopia and all the consequences of trying to exert brutal control over nature.

Colin believes that Solarpunk also shows how we can abuse nature with well-meaning efforts. For example, depending on our view of Solarpunk, we could think of early banana plantations or the revolutionary dryland farming techniques of the 1920s as important historical inspirations of the genre. On banana plantations, owners utilized highly advanced (for the time) farming techniques – chief idea above all was the concept of a monoculture. A monoculture is a farm that grows clones of a single plant and bananas clone SUPER EASILY using cuttings (no petri dishes or high-budget sci-fi montages involved, just a pair of clippers and some dirt).

Because all the crops possess identical genetic sequences, monocultures produce extremely consistent fruits like clockwork. Monocultures are responsible for the consistent, abundant fruit at our modern grocery stores. However, monocultures also inherently contain a critical weakness – lack of genetic diversity.

To Colin, the example of banana monocultures and Panama Disease demonstrates how much we can learn from a Solarpunk future. We need visions of sustainable futures where do learn from nature and avoid the horrendous mistakes of our past.

Solarpunk is also very hopeful and grounded in reality – the first story that seemed “Solarpunk” to Colin was William Kamkwamba, who built a wind-powered water pump in Malawi in 2001 from a bicycle and scrap.

The punk to me is resisting the temptations of short-cuts in environmentalism and not letting human greed bring down the dream. When doing environmental work, we always need to be mindful of how every effort possesses positive and negative effects.

To me, we can learn much about large-scale environmentalism (and Solarpunk) from the example of repotting a single plant. If the plant is ill, say the soil is contaminated with mold, you must remove the old soil and put the plant in a clean pot with fresh soil. The process of removing the old soil from the plant’s roots undeniably breaks healthy roots and causes damage to the plant in the short term. However, leaving the plant in the mold will undeniably kill the plant in time. Therefore, a gardener must examine the degree of illness and find the right balance between damaging healthy roots and removing contamination – this trade-off is a small-scale example of the larger issues characters in a Solarpunk story or game must face on societal, environmental, economic, political, and personal levels.

Colin is also a game designer on our own tabletop RPG version of a Solarpunk game, “Project Violacea”. In the game, you play revolutionaries in a domed solar-powered city run by a genetic-based totalitarian regime.

The game explores how selfish and frightened people can take advantage of nature and society. However, by pulling together and facing our fears, we can work with the earth and each other to make amazing leaps forward. We have the tools, but we aren’t using them effectively because people often succumb to greed and fear.

So…. WTF does Solarpunk mean to YOU? We’ll ask other Sugar Gamers their opinions in future editions of this series and would love to hear your thoughts on social media! Reach out to us on Instagram, Twitter, Discord, and Twitch.